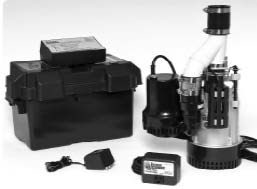 Have you always called a plumber to put in your sump pumps because you think it is too difficult to install your own? Are you looking for a sump pump system that is easy to install?

Did you know you can buy a preassembled sump pump system that includes a primary and backup sump pump?

The following information will let you know what the Watchdog combination sump pump system is, what its key features and specifications are, and key questions you can answer to determine if this is the right pump for your pumping needs. Also read customer reviews about this pump system. 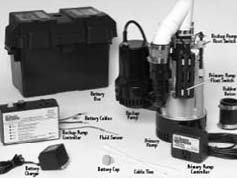 These two pumps come pre-assembled with the discharge piping joining the two pumps, the controller and charger for the BWSP, and two dual micro reed float switches – one for each pump. It does not include check valves, the battery or acid for the Watchdog BWSP backup pump.

Here’s a summary. Check out the details for each of the following features. 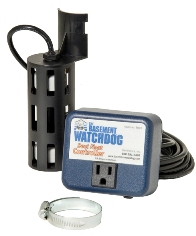 The dual float switches of both the primary BW1050 and the backup pump BWSP make this combination system unique. No other manufacturer offers redundant float switches. Two reed style float switches provide peace of mind for the homeowner because if one float fails, the second float begins operation.

The reed style float switch operates on an open close movement and only a 1/4 inch upward movement in contrast to a mechanical vertical float switch which moves and greater distance and has a tendency of getting stuck in the on position and thus burning the pump motor out.

A protective cage houses the two float switches. This prevents float hang up on the sump basin or with the pump itself.
In addition the cage has a top which prevents debris from dropping on top of the floats. The bottom of the cage is concave, highest point is at the center of the cage which slopes down toward the outer cage walls, to prevent build up of sludge which would interfere with the floats. The cage has openings so the rising of the water will flow through the cage and cause the reed float to begin its open movement to activate the pump motor. 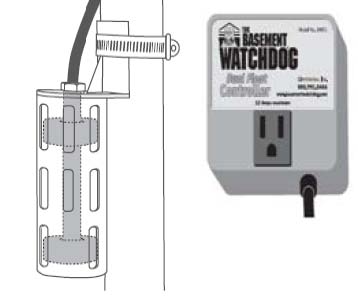 Fits into a small pit

The combination BW4000 sump pump fits into a small pit. A pit diameter of 12 inches is sufficient. Both the BW1050 and the BWSP are narrow pumps only eleven inches in total diameter. 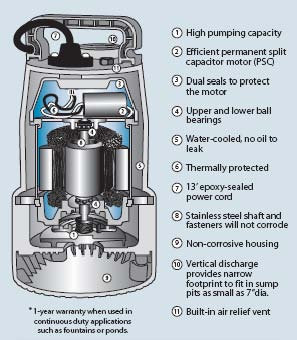 The BW4000 combination pump is both environmentally friendly and energy efficient. Unlike most sump pumps the BW1050 primary pump is water cooled rather than oil-filled. Therefore there is no oil to mix with the pit water.

The permanent split capacitor motor runs on only 4.7 amps compared to 10 amps for many 1/2 HP pumps. The BWSP backup pump runs on 10-12 DC amps. This is why the backup pump can run continuously for 7.5 hours or several days of intermittent pumping  before a fully charged battery is depleted. If the primary pump ran every 6 minutes, there would be a savings of approximately $70 per year.

Other features and specifications
Other features and specifications include the following. The primary pump requires 115 circuit, 120 volts, 50/60 Hz. It will operate in a water temperature of 40 to 140 degrees. It has overload protection. The BW1050 has a power cord length of 10 feet and no manual override. The BWSP requires a minimum battery amp of 140, group size 30. The suction type is bottom with a protective case for the impeller. The size of the discharge pipe is
1 1/2 inches; the warranty period is 2 years and the pumps are built with an air relief vent.

Is this the best pump system for your pumping needs?

Do you need a sump pump?

If you need a sump pump, a battery backup sump pump is very important because sooner or later your primary pump will fail during a rain storm and flooding will occur unless you have a backup pump in place ready for operation.

Do you need a primary and backup pump system that is very easy to install?

Are you concerned about float failure when you are not at home?

Is saving money by using energy efficient products your concern?

The primary BW1050 runs very efficiently on 4.7 amps. This can save you $70 per year depending on how often your sump pump runs. The battery backup BWSP only requires 10-12 DC amps during operation so conserves on battery power which ultimately provides more pump run time.

Is a warranty important?

Is your pit only 12 inches in diameter?

Do you need a combination pump system that pumps more than a 1/4 HP pump?

What are other customers saying?

Watchdog BW4000 Combination Sump Pump Customer Reviews
Best Idea
By Joey, Illinois, April 29, 2011
It cost a lot, but when I think of the cost of a flooded basement, I am glad I bought it. now I have a primary and a battery back up pump. It is so easy to install. Everything is already assembled. All you have to do is connect the pump system to the discharge pipe with a rubber coupler that comes with it. The instructions are so easy. They even tell you how to remove the pump from the packaging to avoid damage to the more delicate parts of the pump. In reading the manual, I found replacement parts available. Good Pump and Customer Service.

By Wayne Zitter, Iowa, April 11, 2011
Before I bought this pump I called Glentronics to see if they were interested in their customers. I found them to be very helpful. This put my mind at ease because I want to be able to talk with customer service when I have questions or a problem. I bought the pump and have been happy with it. The primary pump does what I need it to do. I tested the backup pump and it worked.

Good Idea and Product
By Roger Thornson, Chicago, March 21, 2011
This is a good idea for someone like me. This is worth the money. Even someone like me could install this pump. I tested it after hooking the pump system to the discharge pipe and everything is working flawlessly. I probably don’t need something this powerful, but it definitely will help me sleep at night during a storm! I was not be disappointed in this product.

Peace of Mind
By Derek, Springfield, March 3, 2011
I have had the BW4000 for 2 years now. I am still happy with it. I checked it recently and found the water getting higher but the primary pump was not turning on. I figured something was wrong with the pump so I took it from the pit and tested it in my deep double sink. Then I saw what was going on. The bottom float was bad. I didn’t let the water reach the height of the second float or I would have figured the problem out quicker. I replaced the dual float controller which was easy to do; just unplug the controller and pump and loosed the float and replace it. I bought the part BWC1 from Amazon. I remember when I installed the combination pump. It was so easy. I just had to drop it in and tighten two clamps. Talk about a good design. This is it.

Just What I Needed
By Christopher Brown, St. Louis, September 2, 2010
The water table is high where we live. It bothers me because the sump pump runs a lot. I was concerned because I did not have a backup sump pump. Since I am not very mechanical, I decided to buy a pre-assembled primary and backup pump package which was the Watchdog BW4000. It was easy to install. I also bought the recommended Watchdog battery and acid fill also. But the instructions were easy to do once I set my mind to it. I tested both pumps they are working. The manual says I should test the backup pump at least monthly. I am more relaxed now knowing that there is a battery sump pump ready to take over when their is a power failure.

I have to say the installation of this combination unit was easy. The manual is very good. After I installed it I found the main pump worked well. I unhooked the main pump to test the backup pump. It also worked. I checked the basement watchdog website and found FAQ which will be very helpful for me when I have issues.